Dr Onyeka Nubia specialises in the history of ethnicity and diversity in Britain. And in England’s Other Countrymen: Blackness in Tudor Society, he re-examines a period of British history that is often represented as entirely white.

However, through rigorous research, Nubia shows that there was a significant Black presence in Tudor Britain. We also learn that attitudes towards people of African descent in Tudor Britain were more pragmatic and accepting that you might expect.

Furthermore, by recovering this aspect of British history, the book also provides insight into modern ideas about race and society. 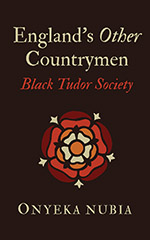